I´m in bed with my Recovery Pump boots on. Just had an awesome massage by Julie, who is one of the therapists working on us over the weekend. Had stuff to eat and have rubbed lotion all over my body. Brushed my teeth, the most underrated item of personal hygiene after a huge day of self punishment. Basically getting all the good karma that money can buy. And I´m going to need it come tomorrow!

My legs are fucked. My lungs are fucked. My back is semi-fucked. But my spirit it riding high and is unbroken so far. All normal and as should be. This race is no joke and if it was easy it everyone would do it. Maybe they would even call it soccer! Getting on the bike tomorrow is going to be dark and scary and slow initially.

swimming into the sun

I had a good swim, except for hitting my head on my lead kayak:) Rich Roll took it out hard and I decided to let him go a bit. I could use his lead kayak as guidance as well.

I love the feeling when the sun rises over the mountains and drop its light in the ocean! It really creates a spiritual and serene setting for the first stage and for the first day.

It slowed at the Outrigger with a few k to go. It felt like we were threading water for a while put I pushed on and eventually reached  the turn bouy in to Keauhou Bay. I came out in 2.20, a minute or so behind Rich. My best swim and the course record is 2.14 so I guess it wasn´t that slow of a swim after all:) 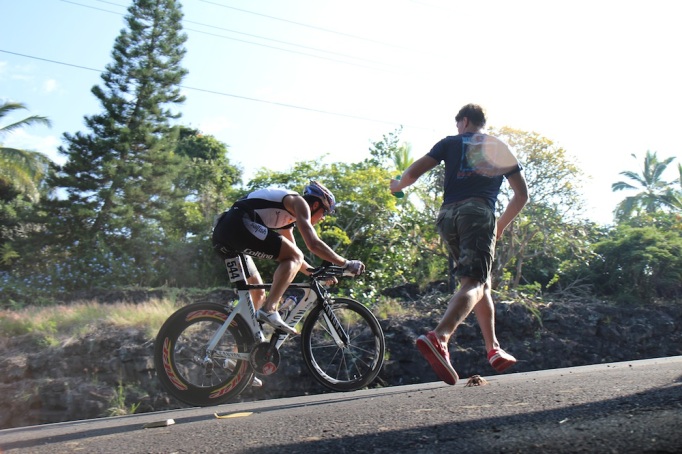 my brother doing the supporting

I took off easy on the long climb out of transition. Easy but steady. Cuz there´s no real easy when climbing in the heat. The first 60 miles roll up and down and there´s a lot of rollers that eventually beat the crap out of ones legs. I was reasonably strong though and I poured on the miles.

sitting up on the job

The last 25 or so miles takes you back from sea level (which you have descended down too) up to Volcanoe at 3800 feet. This part last year, was the hardest hour and a half I´ve ever spent on a bike! I dreaded it now as well. Luckily it wasn´t AS hard as last year. It was just hard, hard but manageable. That is, until the last five miles. Five miles that might as well have been 50 miles in my book. The-miles-just-never-end! 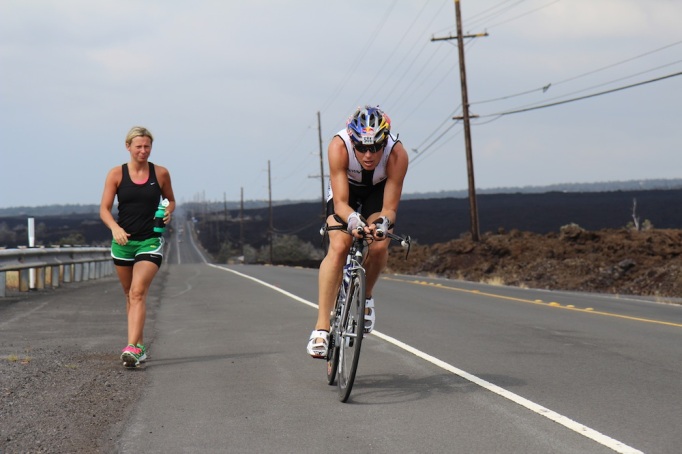 My lovely Elin is all colour coordinated as well as giving me fluids!

I finished in 7.15. I was happy to roll off the bike and hit the ground like a sack of bricks. Mike Coughlin out-split me on the bike by a few minutes but trail me by half an hour. He seemed equally trashed at the end.

We´re all a sore sight tonight. Everyone, except Fredrik who just spent 10 minutes standing on his head as part of his yoga exercise. My sympathies and utter respect to the athletes still out there. When you finish late you don´t get much rest for next day. A day that begins all too soon.

beat up and beat down but still up-beat. Sort of.